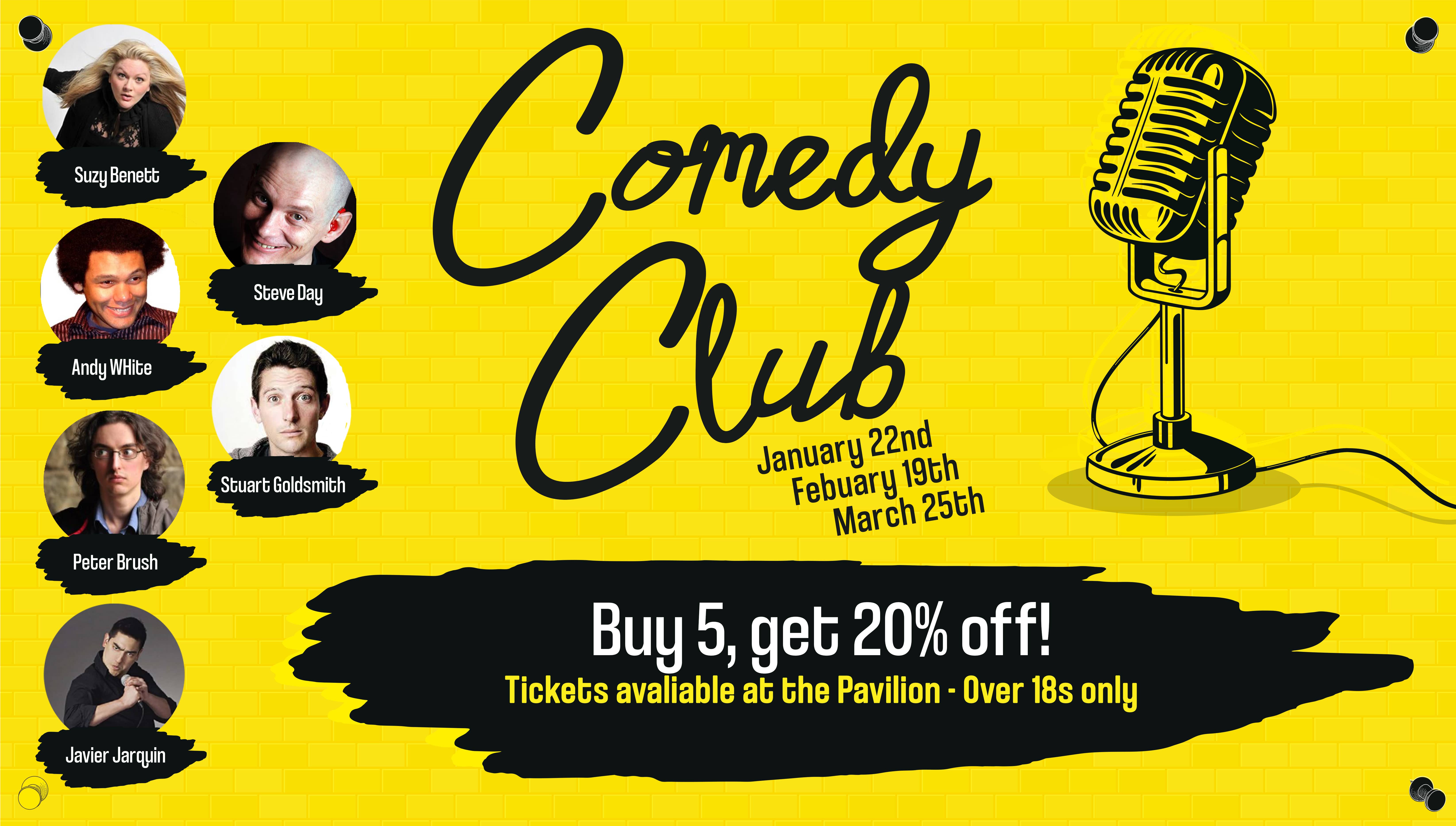 Buy 4 and get your fifth ticket free!

Working alongside The Comedy Club UK, we're sure you'll love this night packed with fun and side-splitting belly laughs to be held in the top floor Ocean Suite.

Our nights will typically include 3 top named comedians from the prestigious UK comedy circuit. The Comedy Club UK never provide 'Open Mic' acts or comedians that do not already have great reputations live, on TV and invaluable experience.

With some audience participation and ‘Joke of the month’ competition, our new comedy club is likely to be the most fun you can have in Exmouth, with your clothes on!

Join us for a night of laughs! Doors are open from 7pm but feel free to come along to the engine room for delicious food before the show.

Andy White is a Brummie true comedian who escaped from a call centre to become a stand up comic.

He combines silly voices and a mad afro to devastating comic effect. Andy's humour embraces silly voices, funny faces, observational humour, topical humour and his mixed race background. He can do comedy material that's clever, cheeky, sick or just silly. His performance can shift from deadpan to loud and physical.

Andy has played to a wide variety of audiences, adults and children, both at home and abroad, in comedy clubs, theatres, universities, Radio and TV shows, and at corporate entertainment events

My name is Infact Noel James, although I never pronounce the Infact…" Welsh comedian Noel James is described as being, bizarre, surreal but most importantly extremely original, funny and dam right ridiculous. His act contains a lot of odd jokes with intelligent word play. His best one liners will leave you belly laughing; the worst would beat a box of Tom Smith Christmas crackers to its slow death. On TV Noel has appeared on Stand – Up Show, and alongside Frank Skinner on Packing Them In. Most recently James reached the semi –finals of Britain’s Got Talent 2018 with a very funny guitar routine, narrowly missing out in a place in the final. Catch him headlining all the major comedy clubs & festivals throughout the UK.

Danny Ward's observational humour is up-beat and well honed, and his easy-going style both endearing and very funny. One of the new breed of comics with a high energy set not reliant on smut or swearing, Danny started comedy in late 2008 and has since established himself as comic to watch.

He is booked at clubs across the UK from University gigs to 300 capacity Arts Centres as tour support to many big name acts.  Danny has also performed to returning troops as part of the Decompression Tour in Cyprus for CSE.

Danny is also booked as a compere and hosted the Reading Comedy Festival New Act Competition finals twice, as well as London heats of the  So You Think You're Funny comedy competition and the Jongleurs Joke Box competitions. Edinburgh Festival  he has performed many great shows to critical acclaim: "If there is better stand up elsewhere for free then I want to know about it, because it really would have to be world class to top this show. Danny Ward's observational humour is brilliantly delivered ... This is top quality stand up that should have filled the venue twice over. I implore you to go and see it!" Three Weeks, 4 stars, Edinburgh Festival. "Danny Ward clicked with the capacity crowd immediately and his brilliantly-timed, slightly manic approach was bolstered by some really tight, strong material. His often hilarious riffs on everyday shopping at discount stores created a thread that worked brilliantly throughout, with a killer ending". Bournemouth Echo

Steve broke into stand-up in early 2002 and since then has become a regular performer across London and the South East, including gigs at The Comedy Store, Downstairs At The King's Head and the Comedy Cafe. Steve has a warm and friendly style and mixes topical and observational material with an array of neat one-liners.

Star of “Live at the Apollo” BBC2

Top Comedian, actress and writer Laura Lexx is a uniquely gleeful performer who indulges her audience in an unrelenting childish attention.  Laura has gigged all over the UK and in Europe as well as providing tour support for Russell Kane. Laura has performed at Latitude, Larmer Tree Festival, Bestival and Kendall Calling. She has a quirky, Somerset spin on the world and is happy to relax with the audience and take any subject from a frank discussion of her struggles with IBS to the televisual preferences of sleeping bags. Yes, sleeping bags. Laura Lexx built up her initial stage confidence as part of an improvised comedy troupe, leaving her with the skill and confidence to build up a quick rapport with the audience as a compere. An avid writer, she has also produced and directed several stage plays at University, which were well received and allowed her to express a more serious side to her performance skills. She continues to build an eager online following with her blog and has had recent success at the Edinburgh Fringe after developing a brand new panel show format, Quiz in My Pants, which delighted guest acts and audiences equally.

BBC1 - The Stand Up Show, The Real McCoy, Never Mind The Buzzcocks

Channel 5 - Night Fever, In The Dark With Junior Simpson, Bring Me The Head Of Light Entertainment, The Comedy Network

Having survived being called ''the new Lenny Henry'' - he's much funnier than that, lapsed choirboy Junior Simpson is a true star of both the black comic firmament and far beyond.

He will be a familiar face from the big, bad world of TV& Film both from the likes of’ Big Brother’s Little Brother’, and  DJ Role in Love Actually. Also Junior  one of the team captains alongside Suggs on Night Fever and as host and star of two of his own series, In the Dark with Junior Simpson and The Hit Man, both for Channel 5. He has also worked with the likes of Jo Brand, Rolf Harris, Frank Skinner and Jonathan Ross.

As always tickets are available from our friends at Exmouth Pavilion.

We were in a rush and just had time for a meal of cheeseburger and chips. They were freshly cooked, very tasty, hot and well presented. The staff were attentive and polite. We visited quite early and it was very quiet in there but we were made to feel welcome. 😊

Omg the food was so good and hot so much better then i thought it would be ... Nice clean place .. dog friendly wheelchair friendly ..will be going back as they do bowling and things that didn't get round to seeing